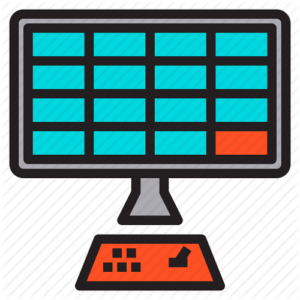 A video switcher enables different cameras to be switched to call-up monitors. In a smaller, cost-conscious applications, a manual switcher allows users to select the camera they want to see by pressing the appropriate button. The most popular type of switcher, a sequential switcher, contains circuitry that will switch one camera to another automatically. The operator can set the length of time (dwell time) that a scene remains on the monitor before sequencing automatically to the next camera. This allows operators to keep tabs on numerous cameras with only one monitor.

A matrix switcher is a more complex design enabling the user to switch any video signal to any call-up monitor in a large-scale system. They normally incorporate pan, tilt and zoom control and other features such as preset and alarm inputs and outputs.

Unlike conventional recording systems, a video multiplexers collects full-screen pictures from several cameras and displays them simultaneously on a monitor. Operators have the option of displaying any camera full screen or multiple cameras in reduced sizes. Multiplexers also can record all cameras in the system onto a single videotape or DVR. The cameras are recorded sequentially at a high rate of speed. As mentioned earlier, a standard video signal is comprised of 30 separate frames each second. In a video system containing 15 cameras, the multiplexers selects two frames from each camera and records them to a single videotape. The result is an effective frame rate of 2 frames per second, instead of the standard 30. Most multiplexers today contain motion detection features that enables the system to record more frames of video from cameras showing motion than from those not showing any motion. The multiplexer does this by reallocating frames from one camera to another as needed. The net result is higher quality recordings of scenes that are more likely to be important to security personnel.

The main feature of a quad is the ability to compress images from four separate cameras and simultaneously display them on a single monitor screen. When four cameras are displayed, each occupies a quarter of the screen. A single camera can be selected and displayed full screen as well. Unlike multiplexers recording, quad recordings yield only what appears on the monitor at the time of recording. If the VCR is recording in quad mode, then the playback is in quad mode.