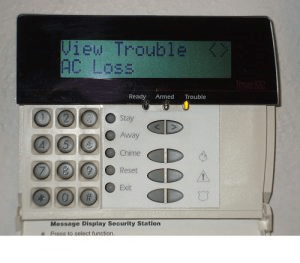 Like all batteries, your backup has a useful life of about 3 to 5 years, but that life may be shortened if you have had several power outages. Your system battery should be checked annually, or after any storm related false alarm, by an alarm technician and replaced when needed.

Almost all security systems have a rechargeable battery that powers the system for a minimum of four hours in the event of a power outage. If you have a wireless system, you may have several batteries in the motion detectors, as well as a backup system battery.

Change all control panel batteries at least every 3 years or more often if you experience frequent power outages. All security alarms have a large back-up battery in the control panel that runs the system for four to six hours during power outages. The life of a battery depends on how many power consuming devices are installed and how often the batteries are required to “kick-in” due to power failures. Be proactive and replace batteries before they die and cause false alarms.