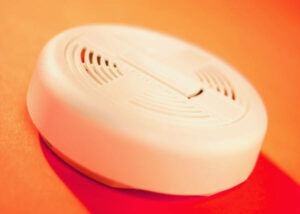 Others, known as system smoke detectors are powered by a central source and connect to a control panel to sound the alarm.

Smoke detectors use two types of technology, photoelectric detectors and ionization, to sense a fire.

Photoelectric smoke detectors use light and how it is reflected to detect smoke. Normally light is projected into a smoke sensing chamber inside the detector assembly. The light hits a black background of the chamber and is absorbed. When enough smoke enters the chamber it reflects the light on to a sensor inside the chamber. This causes the sensor to indicate an alarm. Photoelectric detectors are better at sensing smoky fires, such as a smoldering mattress.

How Many Smoke Detectors Do I Need?

Install smoke alarms on every level of your home, including the basement. Many fatal fires begin late at night or in the early morning. For extra safety, install smoke alarms both inside and outside the sleeping area. If all the bedrooms in your home share a single hallway, place the smoke detector in the hall outside the rooms. You should have an additional detector outside every bedroom that doesn’t share a common hallway. If you sleep with the door closed, put another detector inside the bedroom. On floors without bedrooms, place detectors in or near living areas. A good place for a smoke detector in a two-story house is at the top of the stairs since smoke from downstairs will rise along that path.

Also, smoke alarms should be installed on the ceiling or 6 to 8 inches below the ceiling on side walls. Since smoke and many deadly gases rise, installing your smoke alarms at the proper level will provide you with the earliest warning possible. Always follow the manufacturer’s installation instructions.

How Long Will My Smoke Alarm Last?

About eight-to-ten years, after which it should be replaced. Like most electrical devices, smoke alarms wear out. You may want to write the purchase date with a marker on the inside of your unit. That way, you’ll know when to replace it. Always follow the manufacturer’s instructions for replacement. Many states require you to replace the detectors every 10 years.